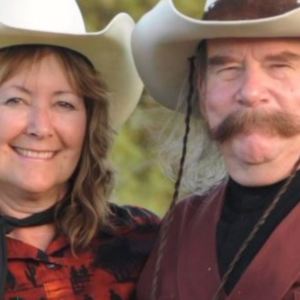 Western Swing & Other Things is a long-running radio program now in its 33rd year of broadcasting.

Our show was created in October of 1988 by Marshal Allen Bailey who served as Marshal of Dodge City, Kansas, for 17 years. Today the show is co-hosted by the Marshal’s lovely wife Cowgirl Janey. It is produced in our own studios and broadcast from the Swinging Gate Ranch, an actual working ranch on the frontiers of Kansas -- Ranchy Radio at its best!

In the early days at the country’s first community-licensed public radio station in southwest Kansas, Marshal Bailey built an audience that gave real meaning to community radio. Western Things and Other Things introduced the High Plains to the genre that reflected the history and enriched today’s cultural landscape.

Allen has been playing Western Swing music every since he was 11 years old and has had the pleasure of playing with many well known Western swing greats, such as Hank Thompson, Buddy Emmons, Eldon Shamblin, Randy ‘Snuffy’ Elmore, Pat Jacobs, Jack Bailey, and Frankie McWhorter. He has also interviewed a number of celebrities on his show over the years including Roy Rogers, Gene Autry, Patsy Montana, Buddy Emmons, Johnny Gimble, Randy Elmore, Don Edwards, Ray Benson, Ranger Doug, Jerry Rivers (Hank Williams’ fiddler) Jett Williams (Daughter of Hank) and many more.

His radio program has earned him several awards over the years including:

Western Swing Society of the Southwest Hall Of Fame

As Marshal of Dodge City, He has had his footprints and handprints placed in concrete in the Old West Walk Of Fame, along with notables Burt Reynolds, and Johnny Crawford.

Cowgirl Janey joined the Marshal on air in 2011 adding the extra sparkle and wit that makes the show a listener favorite and makes it so much fun!

The next chapter of WSOT began when Janey and Marshal launched the program around the world, engaging a new audience over internet radio. The journey began with an invitation by Mary K. Burke of Glasgow, Scotland of MKB Independent Radio and expanded with a second invitation from Jim and Martha Farrell of Truckers Radio USA. Today, Western Things and Other Things is heard seven days a week on nearly a dozen sites worldwide, on both the internet and terrestrial towers as well.